JOSH is an occasional contributor. It’s good to see another submission from him.

I just wanted to submit this section cover for the blog. “To Kill a Mockingbird” author Harper Lee is from Monroeville, and there is an annual stage production of TKAM, including scenes in the courtroom used as a model for the one in the movie. The man who plays Atticus and the kids in the play were all unavailable, so I went with Boo Radley for the cover photo, and this is what I came up with. Let me know what you think. 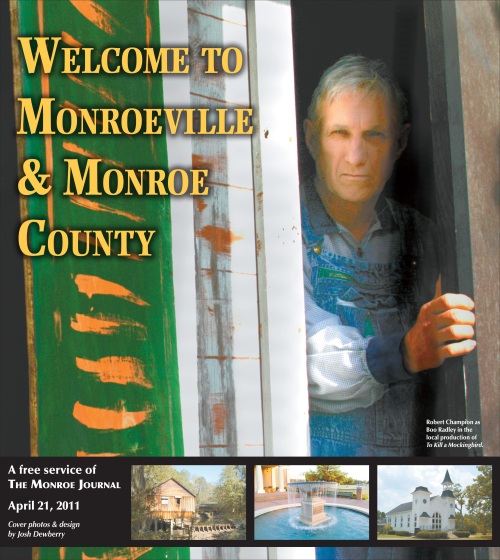 1. I know this is supposed to be a welcome/visitor’s guide but the photo doesn’t feel very welcoming. No, we don’t want Boo smiling…but perhaps you should have waited for one of the other actors to be available. Boo appears looming and dour. Not very welcoming.

2. Did you consider running the “Welcome to…” title flush right? It might have been interesting to align it along the left edge of the door jamb.

3. I like the photo package along the bottom but wonder if some color other than black might have served better as the background. I might have experimented with the orangish color of the swatches on the green background in the photo—or perhaps the same gold in the “Welcome to…” title type.

So, I’ve picked some nits here but my main concern is still the lowering photo. I just don’t feel very “welcome” looking at this cover.

How about the rest of you? Thoughts? Suggestions?

Page from: Marc Stumbo | The Beacon

MARC SENDS ALONG another tab spread for us to review.

Thought I’d submit my centerfold from last week for blogger comment. Our reporter was going to write a single (and LONG) main story. I suggested breaking up the Mass from the main piece and also asked for “picture quotes” to give me some elements to use to liven up the layout. I had considered rotating the page — I’ve done that once before — but there was not enough time to come up with two versions for approval, so I went with our traditional layout. 1. A bit of negative space here and there would have made this more inviting. It feels crammed.

2. I’d have used fewer photos and given some of them more size. The interior shot with the flag at the bottom left is a candidate.

3. The red in the lead headline is a bit too pink for my taste. I’d have picked up the red in the bishop’s vestments (photo at bottom right).

4. I like the idea of the mugs with the quotes but…I don’t like the “checkerboard” placement of the three at the top of the page. I’d have done all three mugs to the right, with the quotes at left.

5. I don’t like grouped captions. The one with the four photos at bottom center is an example: it refers to the photo at the top of the spread. Sorry, but’s that’s just too much of a reach for me. I’d prefer each photo to have its own caption.

6. The smaller photo in the Mass sidebar is off grid… looks like it was placed there just to fill a hole. It’s distracting.

Comments, quips, criticisms from the rest of you? What do you think? Am I being too critical? Chime in!